Developing a mobile app for your business is the only way to stay relevant. But with hundreds of programming languages out there, it’s tough to know which one is best for your app without having a coding background. While there are probably no more than 10-15 languages that a modern app developer might use, finding the perfect one will make developing an app a lot easier.

Here, we’ll break down the different options when it comes to platform support and development decisions. Different programming languages offer different strengths depending on what you’re looking for in a mobile app. While there are too many individual languages to go over, we’ll go over the steps to narrow it down while mentioning the real standout options.

What Kind of App Do You Want? 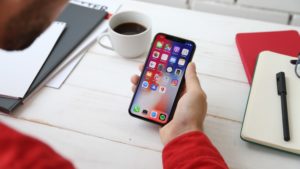 When deciding what kind of app to develop, the first place to start is knowing where data will be stored. Data can either be stored on a phone, entirely over the cloud, or somewhere in between.

An app that uses the phone to run and store data is called a native app. Native apps require specific programming languages to be used during development.

On the other end of the spectrum are web apps, which are hosted entirely over the internet. Think of these like a convenient mobile browser in app form for a specific website.

Hybrid apps lie somewhere in between, taking advantage of native and web app functionalities. The native part of an app allows for more powerful functionality through the phone’s processing capabilities. They also offer things like offline data storage.

Many mobile games or productivity apps need offline capabilities, so for them, taking advantage of native programming is the way to go. The web part of a hybrid app allows for quick access to information stored over the cloud as well as the ability to interface with other users through the internet. If any part of those two types of applications sound appealing, you’ll probably want to develop a hybrid app.

Aside from roughly knowing how your app will function, you need to decide which platforms you want to support. This will be a big factor in determining which programming languages are available to you in development.

If you want to develop something like a social media platform or a retail application, your app must be compatible with iOS and Android devices. Cross-platform development like that not only requires the use of specific coding languages, but it also requires more time in development depending on how much native interfacing your app needs with each platform.

How Frameworks Factor In

While programming languages are at the base of all software, frameworks are what simplify the process for many developers. Frameworks are kind of like rough blueprints that help the coding process go faster.

For instance, all mobile apps need to be coded to support touch screen functionality. Mobile apps also tend to use similar functions for things like menus, keyboard functionality, or any other features that a user will be familiar with. Frameworks, which can run on different programming languages, come loaded with easy ways to program these common features so that developers don’t have to start from scratch each time they make a new app.

Let’s go over some of the most popular programming languages in mobile development.

For anyone in need of an app on the complex side, Python is the programming language for you. Major companies like Google, Netflix, and Dropbox all utilize Python for various instances. One massive appeal to this coding language is its error detection. Code changes can be uploaded and updated in real time, allowing the coding environment to immediately start detecting errors and save you from a lot of headache down the road.

Python was developed as a coding language for the future. It is straightforward but also has more than enough potential for complex functions. Because of this, it has been widely adopted by data and computer scientists. All of these users have contributed to libraries of widgets and commands that other coders can take advantage of.

Oh, and did we mention? It’s all free to use.

Python can be used for any kind of programming application, but it’s increasingly popular for mobile app development. Much of that is due to increased framework options that utilize Python. As mobile Python frameworks become more robust, it becomes easier for mobile developers to utilize the heightened potential of Python.

When it comes to Apple specific products, Swift and Objective-C are the primary programming languages to use.

Objective-C was selected as the primary, general purpose coding language for all things Apple. Taken from the programming language C—a coding language that’s been around for nearly 50 years now—it was meant to be familiar as well.

Swift is the language to watch when it comes to iOS development. It is currently used in conjunction with Objective-C, but Apple has made it clear that they plan to turn it into a full individual programming option for mobile iOS development.

This language offers a sleeker approach as well as increased options for security. Since Apple is increasing its security measures for users, this is a must for development moving forward. If you’re looking for a developer that understands the ins and outs of iOS programming, make sure they are familiar with Swift. 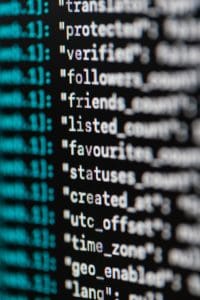 If you’re looking for simplicity, Ruby is the programming language to look at. It allows for coders to input basic commands with a few words that might take lines upon lines of code in other languages.

It also fundamentally changes the approach to app development—it’s a lot easier to test out ideas with Ruby on Rails because of how quickly developers can draft them out. If you want to try out a certain feature or functionality, it only take days to create as opposed to the weeks or months needed in other languages. You’ll have more time to experiment with possible ideas during development.

And again: this one’s free!

While there may seem like too many options to count at first glance, there’s only a handful of programming languages that apply to your mobile app. Once you determine what type of app you’re looking for and which platforms you want it on, it’s all about determining exactly what level of functionality you need.

At that point, you just need to find a developer that who can wield the language your app needs.

Ready to talk to expert developers about your mobile app?