You don’t have to be a programmer to make your own app. It’s important for your business to keep up with the times, and developing an app for your company is a great way to do so. But it isn’t exactly the most straightforward endeavor.

Fortunately, app development isn’t the rocket science it once was. There are many ways to create beautiful, robust apps without having to put thousands upon thousands of hours into coding.

We are going to go over two modern approaches that have made developing an app much more streamlined. Swift and Flutter are both programming options that allow developers and designers to focus more on creating the best product while worrying a lot less about the task of coding.

That means you can focus on building the most beautiful, well-designed app with a developer, all while being more cost-effective. Let’s dive into what the app development process looks like for the company of today. 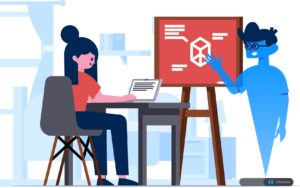 Most apps are made for mobile devices, but they can also be developed for desktops, smart TVs, tablets, smart watches, and more. Fortunately, developer tools like Swift and Flutter allow programmers to create apps for all such devices.

Most of the time though, app development refers to mobile apps—after all, mobile internet usage makes up 55% of all web access these days. But if you’re interested in developing an app for devices beyond the usual handheld device, most developers who know what they’re doing are more than capable of this.

There are three main stages in the process of making an app: planning, development, and testing.

Planning is when you and your developer will solidify exactly what type of app you want to make, from the features to the visual design.

Development is where most of the legwork takes place. This is where developers use tools like Swift and Flutter to create the actual software.

Software can be broken up into two main parts: the front end and the back end. There’s a lot to know about the difference between the two, but essentially the front end is how the app appears to a user, and the back end is all of the hidden coding that makes the app work without melting your phone’s processor.

Testing is the final stage before release where developers test the product to work out any final bugs and make sure that the app accomplishes what the customer wants it to.

One nifty advancement in app programming has made things simpler over the years, and that’s something called a framework. A framework is like a template or blueprint for developing an app.

Instead of having to code every function and detail for an app from scratch, a framework allows a developer to get a head start on the programming side of development. Functions like push notifications are built into these frameworks as options that can be added to a mobile app with ease. You can imagine how much time this saves during the development process when you think of all of the common app features like touch-sensitivity, messaging, vibrate/haptic functions, etc. which no longer need to be coded from scratch.

Frameworks still function on basic coding languages, which are just different types of code that a computer can interpret and turn into an interactive function. Coding languages have existed in computing for over half a century now, but new and improved languages make things far easier for modern computing and programming.

Apple is one of the biggest brands the world has ever seen, and iOS devices make up nearly 60% of the mobile market share in the United States. As you would expect, it’s super important for app developers to be fluent with creating software for Apple devices. Swift is a coding language that has been streamlining the app development process across all Apple devices for years now.

While many older coding languages are complex and clunky (think overcomplicated word problems in math), Swift is intuitive yet powerful. Without getting too deep into the nuances of coding, this language allows for more straightforward commands and cleaner formatting than previous coding languages.

This language was also created by Apple specifically for their products, so it’s meant to function optimally for things like iOS applications. It is also an open-source language, meaning that anyone who uses it can help contribute to things like frameworks built with Swift.

Speaking of which, Swift supports a vast array of frameworks that have been developed for iOS software creation. Whether you’re creating a social media, marketplace, or gaming app, there are frameworks out there that help cut down on development time and provide beautiful, straightforward templates to work with.

Flutter isn’t just a programming language—it is an incredible application framework that supports iOS, Android, MacOS, Windows, Linux, and more operating systems. It allows developers to code using the Dart language, which is another coding language geared towards creating applications.

The Flutter framework is an entire development toolkit, mainly made up of widgets, which are small chunks of a program that perform small, independent tasks. If we look at a social media app for a mobile device, widgets are small chunks of the app as a whole.

There are widgets for:

This tool cuts out a lot of time in the development stage of app creation. Developers and designers can select from a huge library of widgets and select what is most fitting for the app they’re creating. They can then code further intricacies into the widgets and how those widgets interact with the intuitive programming language supported by Flutter. 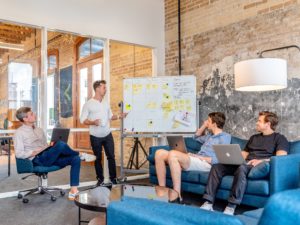 Ultimately, all of this means that app development is faster and sleeker than ever. There’s never been a better time to create a beautiful, easy-to-use app for any field of business, especially if you collaborate with an organized development team. App development is certainly no small investment, but it’s a lot more manageable thanks to some of these tools.